Rolls-Royce’s Heaven isn’t in the UK ©

Being able to see 45 Rolls-Royces in one morning, all made sometime in the company’s first 80 years, is not an everyday thing. Even more out of the ordinary is being able to see 30 more cars made by other companies including Hispano Suiza, Lamborghini, Ferrari, Jaguar, and MG. All of this, in a green setting that is reminiscent of the UK but in fact just 30 minutes outside of Bilbao, Spain.

Most human beings on this planet pass through this life without ever having taken a seat in a Rolls-Royce, much less driven one or even seen one driving on the road. This is not exactly true for those of us who have flown in commercial aeroplanes, however, as many of the planes built by Airbus and Boeing use the quality engines manufactured by Rolls-Royce.

Becoming a Rolls-Royce owner is a pipe dream for many.

The cars are so rare that even their names for the last 100 years have suggested something intangible, even hinted at the ethereal: Ghost, Phantom, Wraith (spectre), Spirit, Dawn, and Cloud.

Along the same lines, it is also hard to grasp that Rolls-Royce heaven is not in the UK but rather in a tiny town some 30 km from Bilbao, Spain. It is the only collection in Europe with all of the models produced between 1910 and 1990 when the company was still independent.

The collections are spread across six pavilions at Torre Loizaga in Galdames, in the Enkarterri district of Biscay of the Basque Country.

Henry Royce was born in Alwalton in 1863 and was an engineer and designer of cars. Together with Charles Rolls, an aristocrat born in London in 1877 who studied at Eton, he founded Rolls-Royce. Rolls died flying a plane in Bournemouth at the age of 32.

Miguel de la Vía, the businessman who started the collection, was born around the time that Henry Royce died. He was a businessman, but his passion was collecting classic cars.

All of the cars have been restored, and they work thanks to José Ángel Durán and his father Ángel before him. José Ángel’s son David is starting to take over the reins now.

All of the cars are special, but a few stand out. Each visitor, of course, has their favorite.

In the first room, a beautiful, pale green 1925 Isotta Fraschini catches our eye. It is a very long and elegant Italian convertible.

In front of it is an ivory colored 1936 Hispano Suiza K6 with black and chrome details. This French car could reach up to 140 km/h.

The third car that stands out is also French: a lovely Renault AX Tourer in red, gold, and wood.

In the second room, there is an impressive British MerryWeather fire engine.

Then there is the 1955 ivory toned MG TF 1500 with its distinctive MG radiator originally designed by Cecil Kimber. This one is a two-seater convertible.

In the third room, there is a 1956 ivory colored Jaguar XK 120 Roadster. Clark Gable had one of these.

In this same room, we begin to dive deeper into Rolls-Royce history with a collection of seven astounding models manufactured after 1970, including the 1990 Silver Spur, the last model produced by Rolls-Royce before the brand was bought by Volkswagen. We are especially impressed with the 1972 Corniche model with bodywork by H J Mulliner, Park Ward.

In the fourth room, which is 100% Rolls-Royce, the first car we see is a Bentley 3.5 Litre, the first Bentley model produced after Bentley was acquired by Rolls-Royce, manufactured in Derbyshire. This one is a pale gray with chrome grill, headlights, and mirrors.

Next we have a collection of coupés, cabriolets, Silver Wraiths, and Silver Clouds made between 1926 and 1966. The 1953 Silver Wraith Sedanca and 1958 Limousine built for the Queen of England stand out with their small blue and white light placed at the top center of the windscreen to announce the Queen’s arrival.

In the fifth room, we have five Silver Ghosts and twelve Phantoms produced between 1906 and 1926. The Phantom II Cabriolet DHC (Drophead Coupé) has an aluminium body, and the Phantom I Cabriolet DHC, whose bodywork was done by Wilkinson, is in white aluminium.

The star of this pavilion is the 1956 Rolls-Royce Phantom IV. Built exclusively for British Royal Houses and Heads of State, only eighteen of this model were originally produced, though one of them no longer exists. The owners were British Royal Family members (5 cars), the Emir of Kuwait (3, one on display), General Franco (3), the Sha of Persia (2), King Faissal of Iraq (2) and the Aga Khan and Prince Talal of Saudi Arabia (1 each).

The sixth room with its stone walls is home to six Silver Ghosts manufactured between 1910 and 1926. It is hard to choose any favorites here.

The Silver Ghost Roi des Belges (King of Belgians) built in 1910 is the oldest of the collection. The blue body with its silver bonnet is by Barker & Co., and it has red leather seats as well as a fold-down hood and windscreen.

The Rolls-Royce Silver Ghost 1997 Open Fronted Limousine dates back to 1912 (1997 is a reference to the chassis number), and its story is a good one.

It left for Australia in 1912 and has been travelling to different car expos around the world up until 2006 when it arrived at Torre Loizaga. It has a flat top with a luggage-rack and spare wheel on top, a second spare wheel on its right side, oil and gas cans on both sides, and a 6 cylinder 7428 cc motor. A beauty of a car.

All of this can be seen to the tune of birdsong at the foot of the Torre Loizaga, a restored fortress tower house, whose surroundings are home to an abundance of olive trees and animals including donkeys, cows, and horses.

There are no public photographs of the mysterious collector, Miguel de la Vía, just another Phantom among the others. 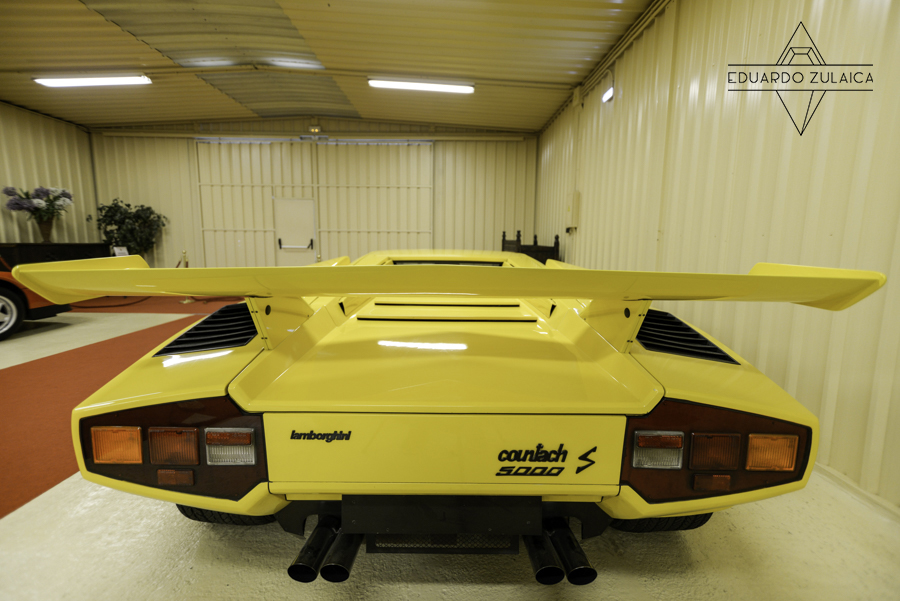 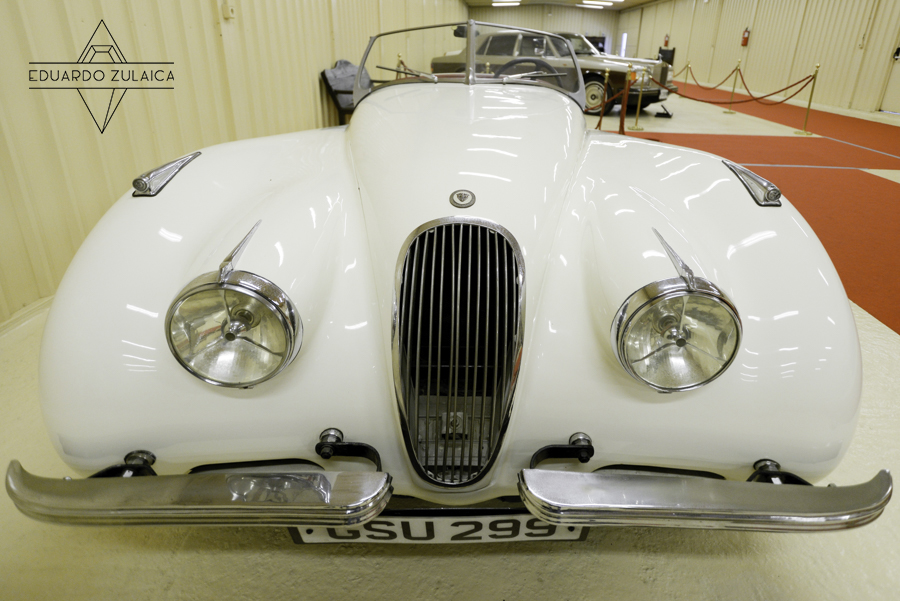 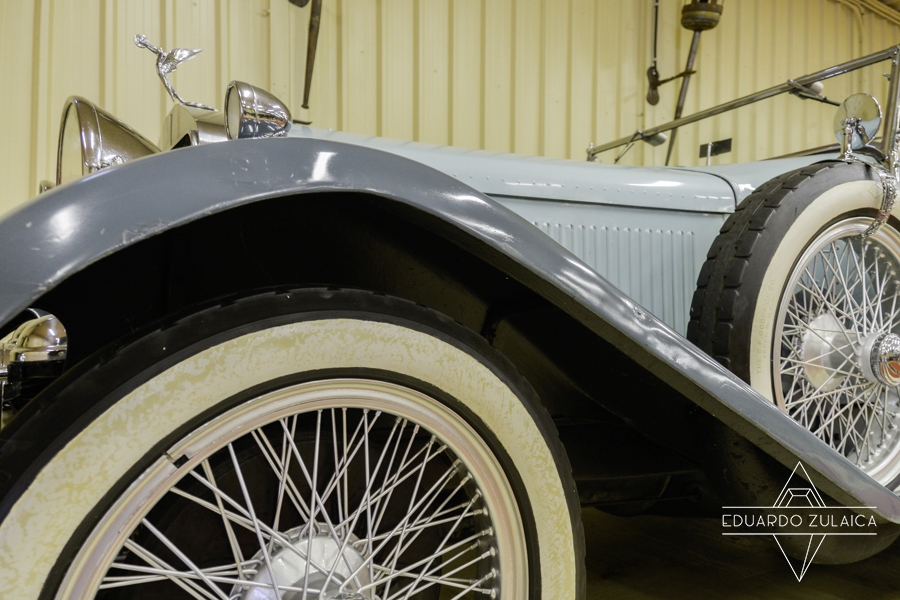 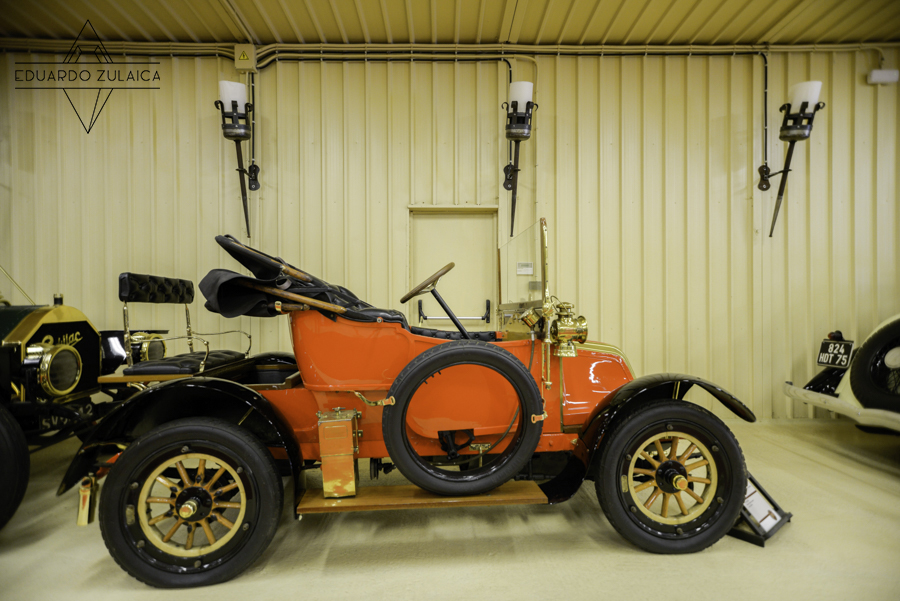 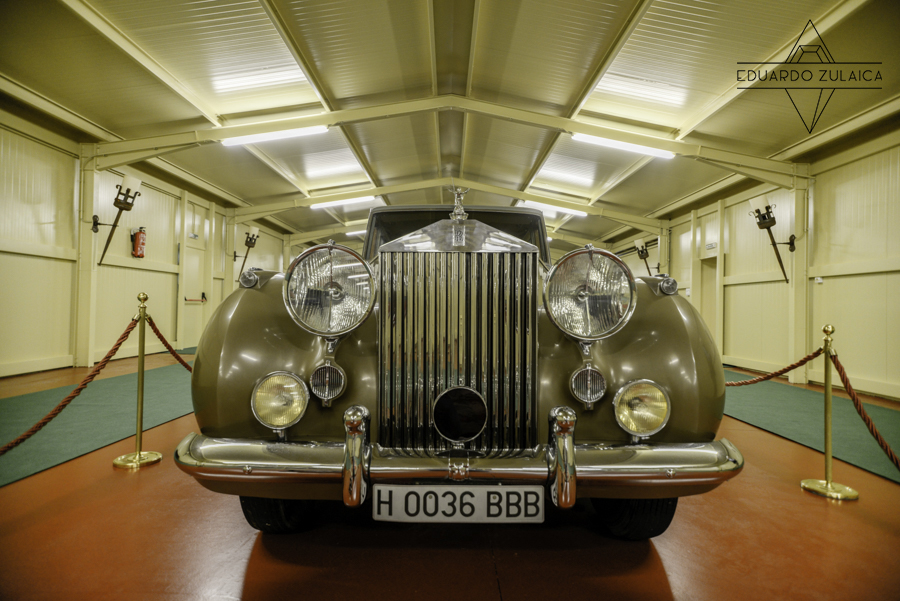 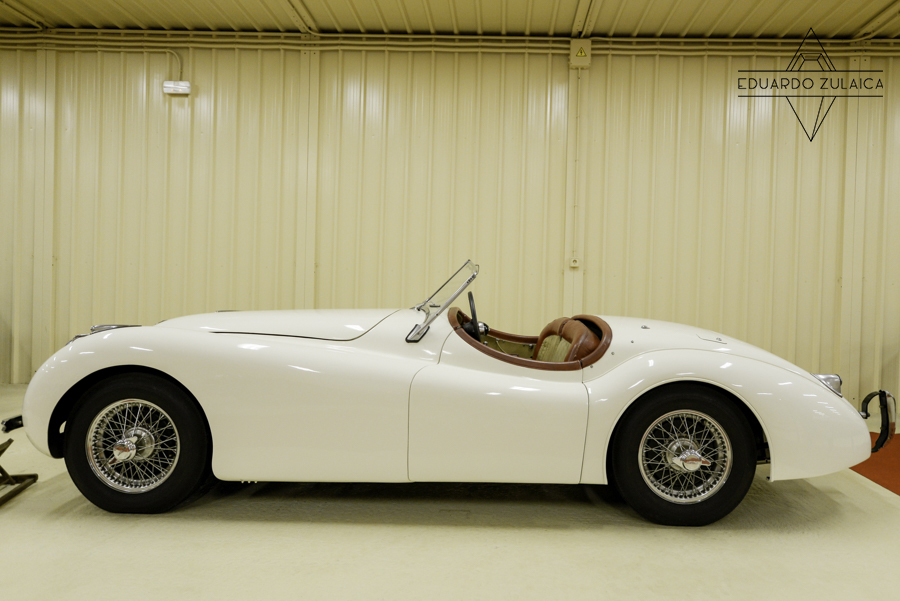 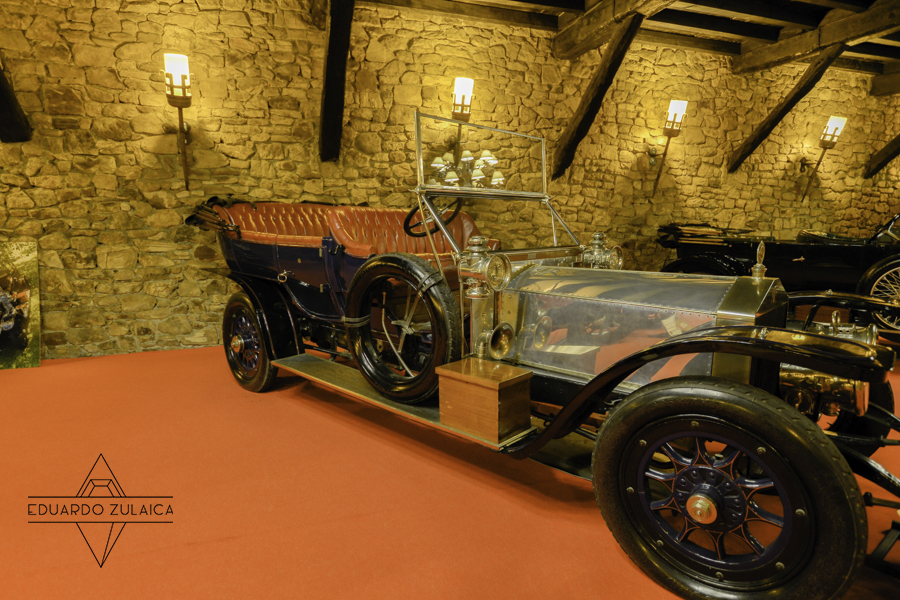 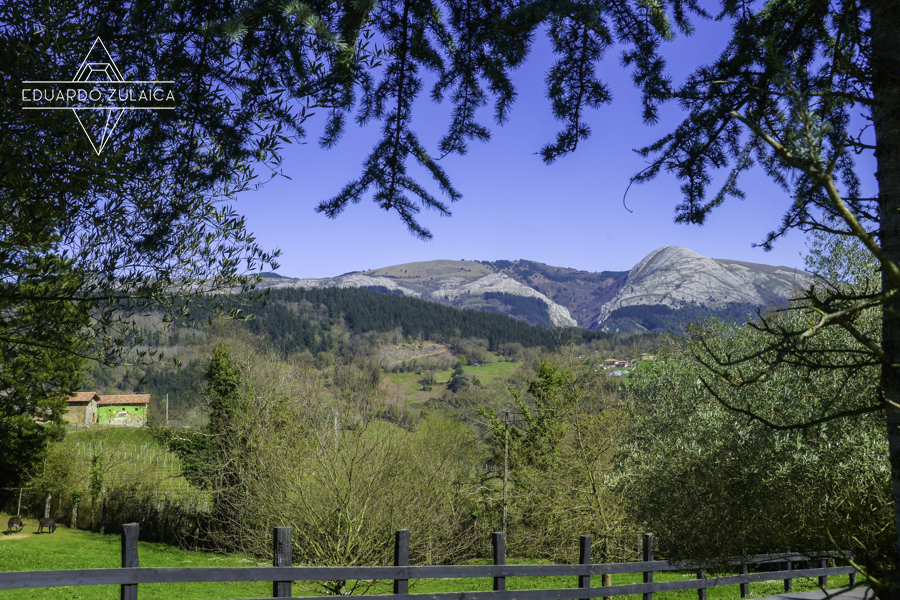 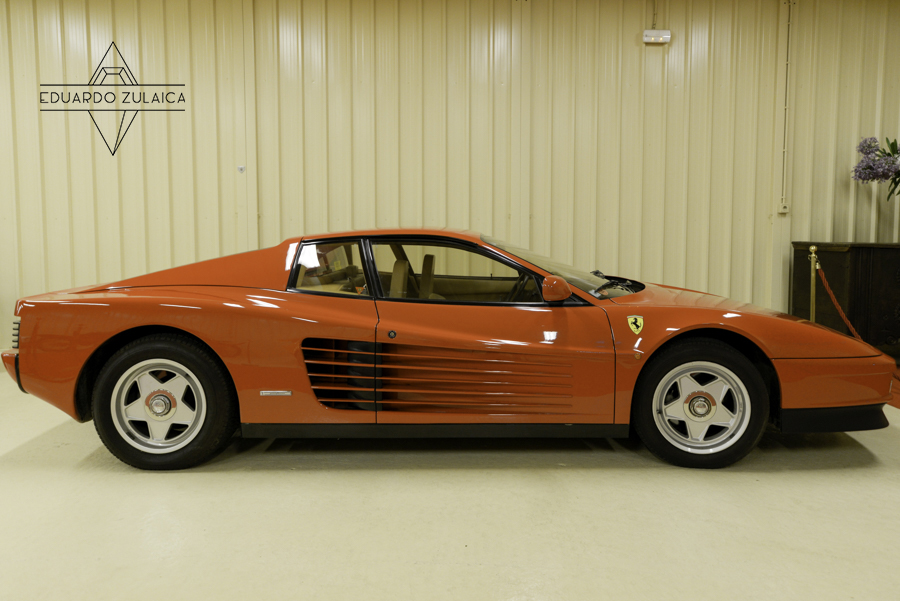 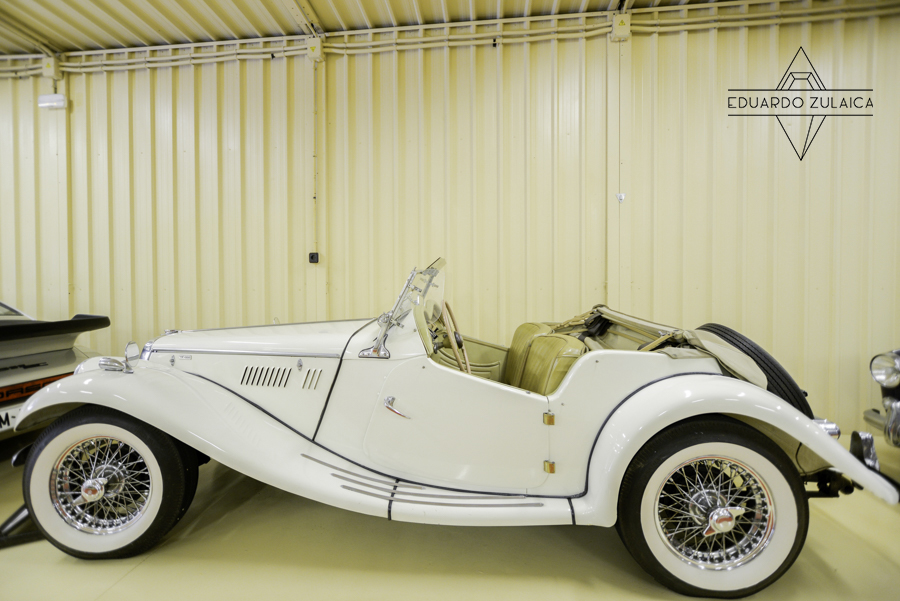 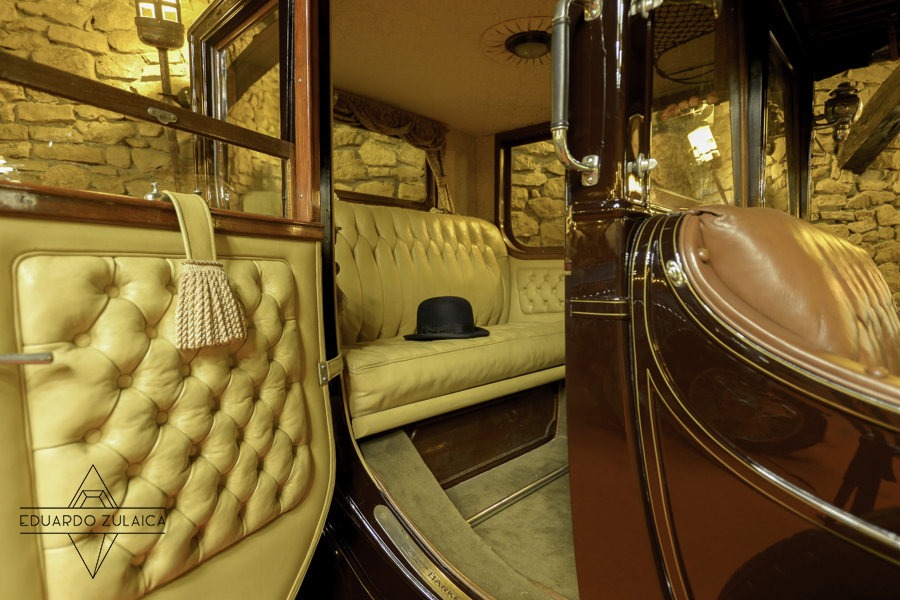